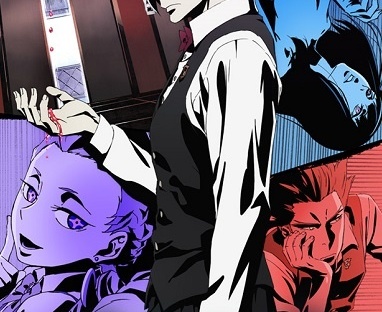 I just finished it and now I’m a mess

‘Death Parade’ is a 2015 Japanese anime series created, written and directed by Yuzuru Tachikawa. Produced by Madhouse, the series was inspired from the short film ‘Death Billiards.’
When people die, they are sent to one of many mysterious bars run by bartenders. Here, the bartenders serve as arbiters whose sole purpose of being is to judge the souls of the dead and ultimately determine whether a person should be reincarnated or discarded into the void. This judgement is made based upon two things: 1) a person’s memories of their life and 2) how one performs in a ‘death game.’  These games are designed to draw out the darkness in a person and so the players are lead to believe that they must participate in a game with their lives on the line in order to create the best condition for arbiters to witness a person’s extreme emotional and physical response to their situation (as the participants’ memories have been purposefully blocked). The series follows Decim, the lone bartender of the Quindecim bar, whose beliefs in judging the people who came to his bar changes when he meets a curious black-haired woman who can remember her own death – making her impossible to judge.