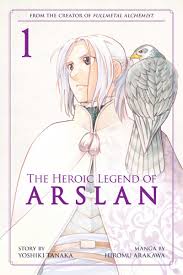 2 REASONS TO READ/WATCH ‘THE HEROIC TALE OF ARSLAN’

“Zealotry and prejudice more than anything, bring harm to the people of the land” – Arslan

By thespookyredhead in Anime, Manga on December 15, 2017
2 comments

“Zealotry and prejudice more than anything, bring harm to the people of the land” – Arslan