This is the prettiest game ❤

Recently I downloaded The Navigator on Steam! So I thought I would just give a little rant about how cute it is and how much I enjoy it!

This is an indie game that has been produced by a team from the IT University of CPH, and is quite short too so it serves as a nice little break or something that you can return to anytime if you want something relaxing yet stimulating to do.

It’s a puzzle game, and probably has been designed to be solved by anyone over the age of… I’m going to say 9. Meaning that it’s perfect for me. The idea of the game is to navigate through celestial bodies by moving your character or the planets around in order to reach the swirly target!

The puzzles do get harder though as you go along obviously, and it’s a nicely paced increased in the hardness of them so that’s wonderful too. Everything is also very well explained, and anytime that you do something wrong the game lets you know (such as try to move a celestial body that is too big to be pulled towards you) why you can’t complete that particular action in a nice, little, elegant sort of font.

Nice, clear instructions given out so that I could understand what was going on when playing at 11pm at night.

It’s a really simple game concept, but what I really like about it is how pretty it all is! The planets are beautiful, with such nice colour combinations and wavering, live colours swishing on the planet. I like the nice little touch of having the mouse show up as an anchor too, and having my sailor black and white to contrast against the colour of all the puzzle pieces.

The prettiest of pretties.

I thought it was clever how they worked with the planets and puzzles too – using things like the suns as lights, the idea of navigating through the ocean via star charts (hence the planets and stars), having different options like travelling between planets… It was all so well-thought out. Especially with how cutely named this game is too – The Navigator – on a ship, as you use planets, light and the sun to navigate your way through! 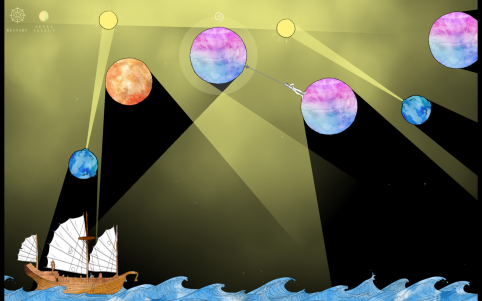 And the music was so nice, it was relaxing and even if I struggled a bit with a puzzle I was left feeling very calm. I think the pretty visuals helped with that calming mood too.
And as always, the refresh option at any time and automatic saving was great and very handy. The exact moment that I knew… I had stuffed up.

So essentially, this is a puzzle game that is so cute, pretty and calming, yet still has a good amount of challenge to it!

3 thoughts on “THE NAVIGATOR: I LOVE THIS GAME”