I can’t believe that I never wrote something about this game!

It’s so creepy and so amazing. The storyline is interesting, the characters are fascinating, and everything about the game is aesthetic and coherent.

Some of the stand-out features of the game for me are:

The yellow-tinted and vintage cartoon style of the factory the game is set in is so beautiful. All the ink dripping throughout the factory, the character’s creepy designs and the pentagrams and writing in black ink all around the place contrasts well to the yellow-hued surroundings, and makes the place truly seem haunted and abandoned. Like something terrible has happened there.

The vintage cartoon style of the characters, and even the entire factory, really ties in well with the storyline too. Everything about the game visually is so well-put together and helps to build up and maintain our sense of the story world the game is set in. 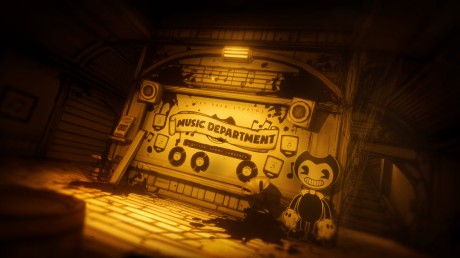 I love the music of this game. Horror music in general is so interesting to pay attention to. It’s so expressive and intense, and its whole purpose is to evoke emotion from the audience. Its purpose is to make us feel uneasy, and it does this very well.

With things such as dynamical changes, changes in what instruments are playing and changes in rhythm and tempo we do react. We recognise the increased intensity of a situation the game has just presented us with or has been working its way towards. I love the whistling features in the soundtrack too as it really adds to the vintage cartoon theme that game has.

For this game, especially mixed in with an increasingly dark plot and visuals as the story progresses, the music greatly contributes to the for overall experience of playing. 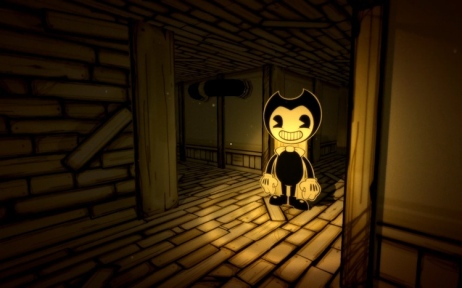 There are so many seemingly ‘smaller details’ in this game that I couldn’t possibly bring them all to mind at once. But one that does is the fact that things just respawn or move when you turn away. I went through breaking all the cardboard Bendys in the factory that I came across at the start and kept getting creeped out when I’d turn back and all of a sudden it was there like nothing ever happened. And the cut-outs that would also just move, or the doors that would just unlock, and lights that would flicker or just go off and on really added to the gameplay for me.

Ink dripping everywhere around the factory from the first episode too is just creepy to me. It was like a continuously reminder of that bad things happen, and will happen, here while playing.

The commitment to the vintage cartoon style too was even seen in how some clues to what happened as more characters and parts of the story are introduced and explained being found on ‘older’ technology was great. (Speaking of the voice recordings found throughout the game, the voice acting was wonderful! I loved how calming Stein’s voice was throughout parts of the game, and how on edge voices on the recordings were. Really grounded me in, again, the horror aspect of the game.)

All the satanic things to find around the place too were really detailed. And I loved how some of them were even set-up with candles, and some with candles that were alight – particularly odd for factory with apparently no humans in it.